DISCLAIMER: I now (March 2013) work for Virgin Media as a contract PHP Developer. The views below are on Virgin’s Superhub service and do not reflect my views on the project I am working on (which is a great project) or any of Virgin’s development.

Wellsy rang again in the morning as it’s been intermittent again. Apparently if we log a complaint 7 days in a row then the contract is viable to be cancelled.

Found out that their big internal expansion project in this area that should allegedly fix the issues is on the 6th of March 2013.

Intermittent again so using the iPhone’s 3g. Just found out our neighbour had Virgin also but sacked them off for Sky because of the problems.

Gone down again, been down since 2pm. Both Wellsy and I are working from home today. He’s on the phone to them again with the usual:

“Just look at our account for how much it goes down. This is unacceptable.”

After a lengthy phone call of at least 25 minutes where he had to elevate to speak to someone more useful, here’s what we’ve got:

Ok so the chap on the phone has confirmed that the problem is over-demand in our area and not specifically our household. This means that Virgin are knowingly over-subscribing a sub standard service.

As far as I can see, we’ll get bugger all from them, so we now need to decide whether to just leave the service in the hope it will improve at the start of the year, or move to another provider. Personally I want to escalate this to someone further up and get their opinion on our service and what they can do. It’s just so unacceptable it’s unbelievable.

The service has been down intermittently now for 2 1/2 hours, ongoing. Wellsy who works for SAP has had to go to our mates office for the internet, whereas I’ve taken a break from some Django hacking and am now resorting to my trusty iPhone’s 3g.

Thanks virginmedia for our 7th recorded outage. Visit blog.jmoz.co.uk for more info. instagr.am/p/SDjpL_rKUu/

The internet has been fine for a while (although I have been away for a month) but we spotted a Virgin van outside the other day. Since they came, it’s been dropping out continually throughout the day. I’ve noticed it whilst I’ve been developing a script that makes HTTP requests and which constantly keeps throwing HTTP connection exceptions. Occasionally you’ll notice it in the browser where I’ll get the bland grey Google Chrome error page, but then on the next request everything will be working.

“You know you sent the guys round the other day to fix the internet?”

Internet just dropped out again. No DNS, can’t reach anything outside of the router.

So since the last update it’s gone down a few times more. An engineer just turned up and fitted us some cabling in and around the box at the front of the house. 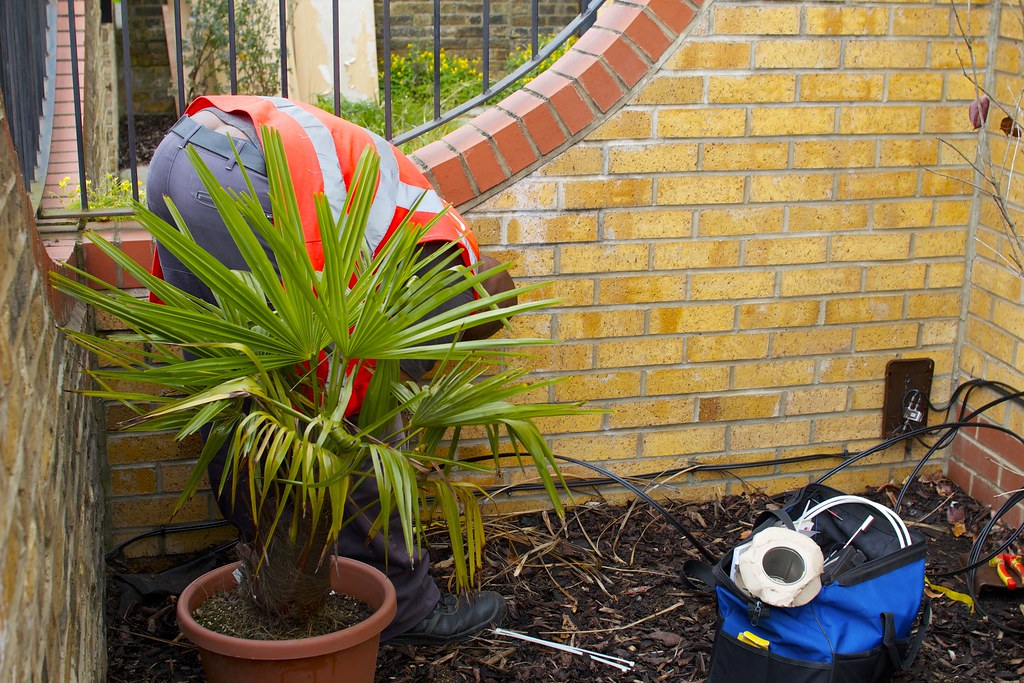 So after talking to him about the situation he tells me there’s a network problem in the area they think, around N1, apparently NW is even worse. Sounds like they’re trying to replace cables and fix things locally to sort it all out.

At around 20:00 tonight Virgin media superhub went down AGAIN. My housemate rang the usual number which he said took about 6 minutes to speak to someone, and then it trolled him through a load of menus and kept cutting out during the password questions:

He got to some sort of badly pronounced automated notice saying that there was errors in the “E8” or “A8” area.

It’s just after 10pm now and the modem has started working again.

The engineer is here now fitting the new Tivo so at least they came through with that, he’s a decent guy, I’ve been talking to him about the service and he says he’s heard of problems in the Dalston area and that they should be able to find out what is wrong and fix it rather than sending us around in circles.

Here he is installing the Tivo. 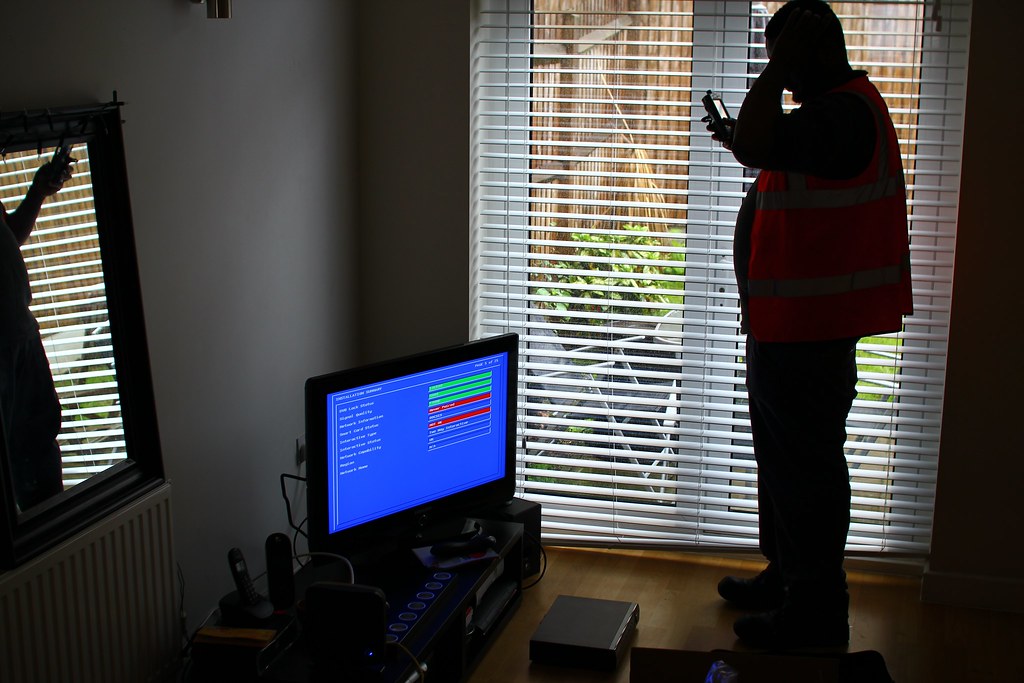 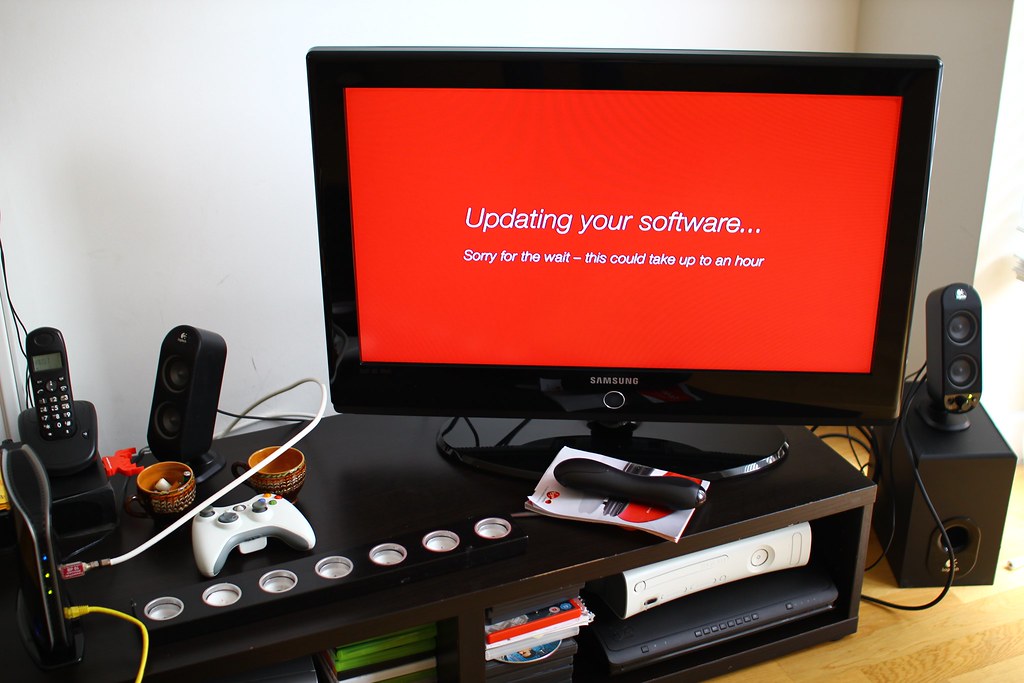 Just before he left, the engineer suggested we remove the filter on the superhub modem which was fitted some time ago to try and fix the power issues. We’re gonna try this and see how it goes (shouldn’t the engineer be doing this rather than us dismantling the modem?)

So I tweeted that virgin were down again in the morning and I’ve just received a reply from @virginmedia which is more than likely a bot that scrapes twitter for ‘virgin media down’. The ‘smartphone friendly link’ 302s to some pointless page telling me they’re “making some changes”. Great. What changes? How long for? How often are these changes? Although the service seems to be back up and running I have no idea what happened or really why it happened and I think some twitter guy at Virgin just tried to confuse me by responding with some non contextually specific question. And how am I meant to know if “making some essential changes” which is written on YOUR website is about the website or area. So basically their response on twitter hasn’t helped and instead served to confuse me. I pointed them to both of my posts about the service hoping they’ll read it. If they don’t maybe I’ll have to create a script that tweets them “virgin media is down” and stick it on a 1 min crontab. You can read my original post at VIRGIN MEDIA SUPER HUB A.K.A. HOW VIRGIN MEDIA EFFED MY LIFE to get some context on this.

Virgin Media superhub is down again, Tuesday 10th July 2012 at around 10:00am. I think we’ll sack it off today and go to Haggerston Espresso Room for a coffee and somewhere where the goddamn internet works, or last resort tether my iPhone and use the 3g connection which no doubt will be better than Virgin.

I’ve been meaning to update my original post about Virgin media superhub being rubbish for a long time now, since then the service has REMAINED BAD and we have had constant problems. Engineers have been sent out, they all feed us different stories and presume we know jack all about the internet. The only decent one that came (of about 10) fed us some bullshit about the power band being too wide and then adjusted it but it still didn’t work reliably. Actually he widened it where as the one before him unwidened? squeezed? it.

It went down last week and Wellsy ended up on the phone to them AGAIN; there must be at least 20 calls logged on our account, it’s clear we have a problem yet it’s never resolved and we get sweet fa compensation for it.

So after it going down last week we also found out that the deal we had is now over and the monthly cost has gone up. Obviously we’d had enough of this bullshit and Ryan gave them a ring on the phone and shouted at them for about half an hour with the sole intention of leaving and going to Sky. I can probably get a cheap deal there as I used to work for BSkyB and have a few contacts still at the place - they’re constantly doing deals for family and friends so there’s a very strong case for us to move there. (They’re back down again now at 10:43am) Anyway they ended up offering us some upgrade package - we get Tivo and a larger capacity box, the speeds get upgraded to some alleged monumental amount which we will never achieve and one of the rooms is getting an extra connection and a Tivo box. Oh and I think the price stays roughly the same. So not only do they provide us with a shit service, they abuse and take advantage of our kind hearted nature and blag us to stay with upgrades.

Ironically they’re meant to be installing it today some time and the service is all over the place.

Wellsy has just reminded me to moan about their FUCKING REMOTE! Useless piece of crap busted and started eating the batteries like they were chocolate biscuits; we ended up BUYING A NEW ONE OFF EBAY. You can stick that on top of the shitty service compensation you already owe us that has started from today.

Last point I want to note is that all of this time when we have rang them they’ve tried to push it under the rug telling us there’s no problem and treating us like internet users on the same level as my Dad, e.g. “have you tried turning it on and off again”. Only once did one of the telephone guys admit there might be a problem in the area. So the next day we happen to find a Virgin engineer round the corner with the box open, we spoke to him briefly and he told us that there’s a problem in the area and I’m sure either he or the telephone guy mentioned OVER SUBSCRIPTION to the service, not our goddamn shitty superhub modem wireless router thing, THE PROBLEM IS IN THE SERVICE.

So now I’ve written this I will try and keep it updated with every time they mess up in the hope that some day they will actually provide a reliable service. Right, now I’m off to upload this post USING MY IPHONE’S 3G CONNECTION.